When Matt Traiger took over at Jesamondo Salon & Spa in 2014, he stepped into a business with a bit of history. The previous owner had been there 35 years, with employees on the books who had been there for decades – some as many as 30 years. What started as a modest Wellesley, Massachusetts operation in 1980 with a handful of stylists is now a behemoth in the greater Natick community. Today Jesamondo boasts 20 chairs, 33 employees, and a thriving full service salon and spa atmosphere.

Much of Jesamondo’s salon success can be attributed to traits becoming more common in salon success stories. I’m talking about investment in employee education, strong leadership, team-first mentality. In my consulting work with Jesamondo I’ve become aware of a couple additional practices and systems they have in place that stand out and, in my opinion, set them apart.

Jesamondo is by all accounts one of the top salons & spas in the Natick area. They also are one of the most active when it comes to community involvement and giving. They are the main sponsor for the St. Jude Runway to Miracles event, which helped raise $400,00 this past May. Jesamondo did the hair for all 65 models who participated in the event, bringing in 11 stylists from the salon to the event on their day off. They work with the Wellesley Service League, helping to raise $40,000 to send underprivileged kids to overnight camp. They are on of the main sponsors for the Natick Service Council, which supports the Natick Food Pantry, and sponsor JDRF, an organization working to fight diabetes. “You name it, we’re there,” says Traiger.

While the salon owner is quick to point out that all this involvement is not done with the expectation of reciprocation, it’s hard not to think that Jesamondo’s salon success in the community may in part be due to just how active it is in the community.

In short, extending your salon’s service outside of salon doors is an area worth exploring. Especially if your salon is in a good financial place to be giving back. 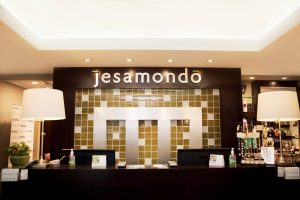 With 33 employees on the books it’s no surprise that Traiger and his team have a system in place for hiring new talent. One of those strategies is to hire young. “We’ll go with a 20-year-old right out of school with no clientele,” says Traiger. “You can see pretty quickly whether or not they have the work ethic to make it.”

Getting hired does not mean getting a chair. On the contrary, new hires roll into a de facto apprentice program, which sees them shadow existing employees throughout the week for anywhere between five months to two years. They also attend classes every Tuesday. “The timing of when they’re given a chair depends on the readiness of the person,” adds Traiger.

Jesamondo only started on SalonTarget in March of 2019, but Traiger and his team have been quick to adopt the features that can make an immediate impact on bottom line – and help employee pay. “Credit card capture is huge,” says Traiger. He refers to SalonTarget’s ability to safely and securely capture and store a client’s credit card. “When a client no-shows and doesn’t give notice, we can still charge the card. Granted it’s just a percentage, but we need to recoup something.” Minimizing losses due to client no-show helps stylists earn a better living.

Jesamondo has also been fast to embrace SalonTarget as a POS system. “With POS, you have the ability to move,” says Traiger. “This has enabled us to adopt Anthony’s concierge concept, which essentially brings the front desk to the customer in the chair to begin the check out process. This cuts down on waiting time at the front desk. It also creates opportunity for product upsell and higher rebooking rates.”

Want to learn more about Jesamondo and the secrets to their salon salon success? Read up on their Vital Stats below or visit them online at jesamondo.com

To learn more how SalonTarget can help your salon, get in touch today!

Change is not easy. I've been in this industry for over two decades, and I've…

Calm in the Face of Crisis: Making it Through the Coronavirus

In these times of uncertainty, we wanted to reach out and reassure you of some…

Win the Day With the Morning Pow-Wow