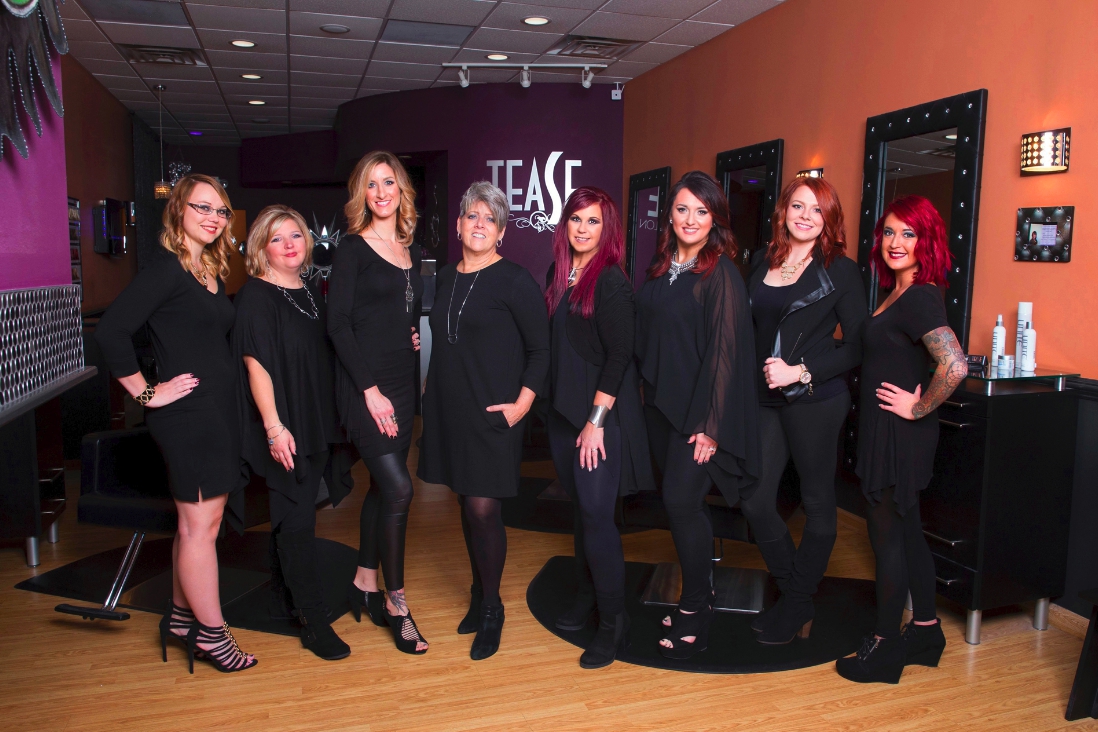 After 20+ years of working in numerous salons for a variety of salon owners, Nancy Hartley (pictured above, fifth from the left) felt she had a clear picture of how not to run a salon. “I was disillusioned,” she says. “I wasn’t happy with how things were being run. There was too much drama. Too many owners and managers didn’t know the salon industry. They might know business, but they didn’t understand the salon business.”

After a brief haitus from salon work, in 2014 Hartley’s husband convinced her to take the massive leap into salon ownership. “We took some money out of retirement and jumped in.”

Four years later Hartley’s Tease Salon is one of Cleveland, Ohio’s best-known salons. It’s taken home Best Hair Salon (2015) and Best Hair Color (2017) for the city’s prestigious “Cleveland Hot List,” and come in second place in both categories in 2016 (Hair Color) and 2017 (Best Salon). “Our goal is to win both in the same year,” says Hartley.

More importantly, Hartley has built a team around her that holds itself to the highest standards and puts group success first.

Before Hartley could dream of awards, she first needed to fill chairs. And for that she needed stylists. “The biggest challenge in that first year was finding good stylists,” says Hartley. “It can be hard to find good employees with a good work ethic.” A lunch with a handful of former co-workers led to some early hires, and from there it was a matter of dominoes falling as one new hire knew of another great potential hire, and so on.

That referral/word-of-mouth hiring process worked nicely for Hartley, but it wasn’t always perfect. “I’m not one to keep someone around if it’s clearly not working,” says Hartley on the occasion where a new hire had to be let go. “But my goal was to creat an atmosphere where everyone was excited to come to work.” One way she achieved this was to eschew the employee non-compete that is typical in the industry. “If you take care of your employees, they’re not going to want to leave.”

Getting the word out

It only takes one look at the Tease Salon Instagram account (see example, right) to know that they’re not shy about posting pictures. The feed is filled with clients’ “after” shots at a frequency of about a post a day. “Social media has made it so easy,” says Hartley. “You don’t have to pay for crazy advertising like print ads and coupons. You can reach so many more people.” How many more? Put it this way: Hartley mentioned that it’s not unusual for a client to drive two hours for a color service. “When people want a certain look or color, they don’t mind traveling.”

To keep photos organized on the salon’s Facebook page their social media manager Danielle created photo albums for each stylist. Clients or potential clients can browse “Hair by Tina” or “Hair by Dana” to find inspiration or get sold on booking an appointment. “When we first opened, clients were funny about having their photo taken,” says Hartley. “Now everyone wants their cut or color featured.”

Technology in the salon

In addition to using social media, Hartley was an early adopter of salon management software. After a less-than-stellar experience with a to-remain-unnamed software, Hartley switched to SalonTarget and has embraced the full suite of easy-to-use features. “I love the dashboard and the ability to quickly keep tabs on productivity, like how many clients are booked, which stylists are booked out that day, and stats on top employees, top retail products, and top-spending clients,” says Hartley. “It’s a big difference from my previous software, which was nothing but trouble from the beginning.”

Hartley notes that her clients appreciate the automated appointment confirmations built into SalonTarget. “My front desk loves it, too. It frees up so much time when you don’t have to make confirmation calls.”

Hartley’s early salon experience under absentee owners shaped her style of salon ownership, and it’s a lesson she’s keen to share with up-and-comers in the industry with similar aspirations. “Be present,” she advises. “Be involved in every aspect of your salon and take care of your employees.”

Check out Tease Salon’s website for more information and inspiration.

Want to learn how SalonTarget can help your salon? Get in touch with us!

The Passion of the Cut: Interview With Third Generation Barber Gregory Zorian III

Contactless Checkout: Reassuring Clients in the Era of COVID19

As hope grows that the nation is close to rolling re-opens, we salons and spas…

Are You Getting the Most out of Online Reviews?

Customer reviews are a double-edged sword, but a necessary one. As a salon or spa…